Back
A Better Subway Map

The New York City Subway Map Redesigned
TOMMI MOILANEN | 7 min read
The New York City subway signage is considered iconic. Black and white signs with Helvetica showing just the information subway riders need at the points they need it and nothing more. After decades it still does its job remarkably well. Originally the signs were black text on a white background instead of the current reverse scheme of white on black but not much else has changed since then.

However, the map is a different story altogether. The 1972 map designed by Massimo Vignelli is considered a design classic and can be found in the collections of MoMA even though it was replaced over 30 years ago by being too abstract for the citizens of New York City.

The current map designed by a committee lead by John Tauranac in 1978 is a lot more geographically accurate but looks quite different from the rest of the subway signage. The free flowing lines also add messiness to the overall feeling of the map. This feeling is amplified by the fact that a big portion of the station names are not aligned horizontally. The map shows quite a few street names but not really enough to function as a proper street map. Interestingly the first version of the map showed more street names than the current version does.

The current map also combines trains running along the same trunk route to one single line and specifies which trains stop at each stations below the station names. On one hand this brings clarity especially to Manhattan which would otherwise be full of crisscrossing lines but on the other hand it makes it harder to quickly comprehend which lines run express and which local. 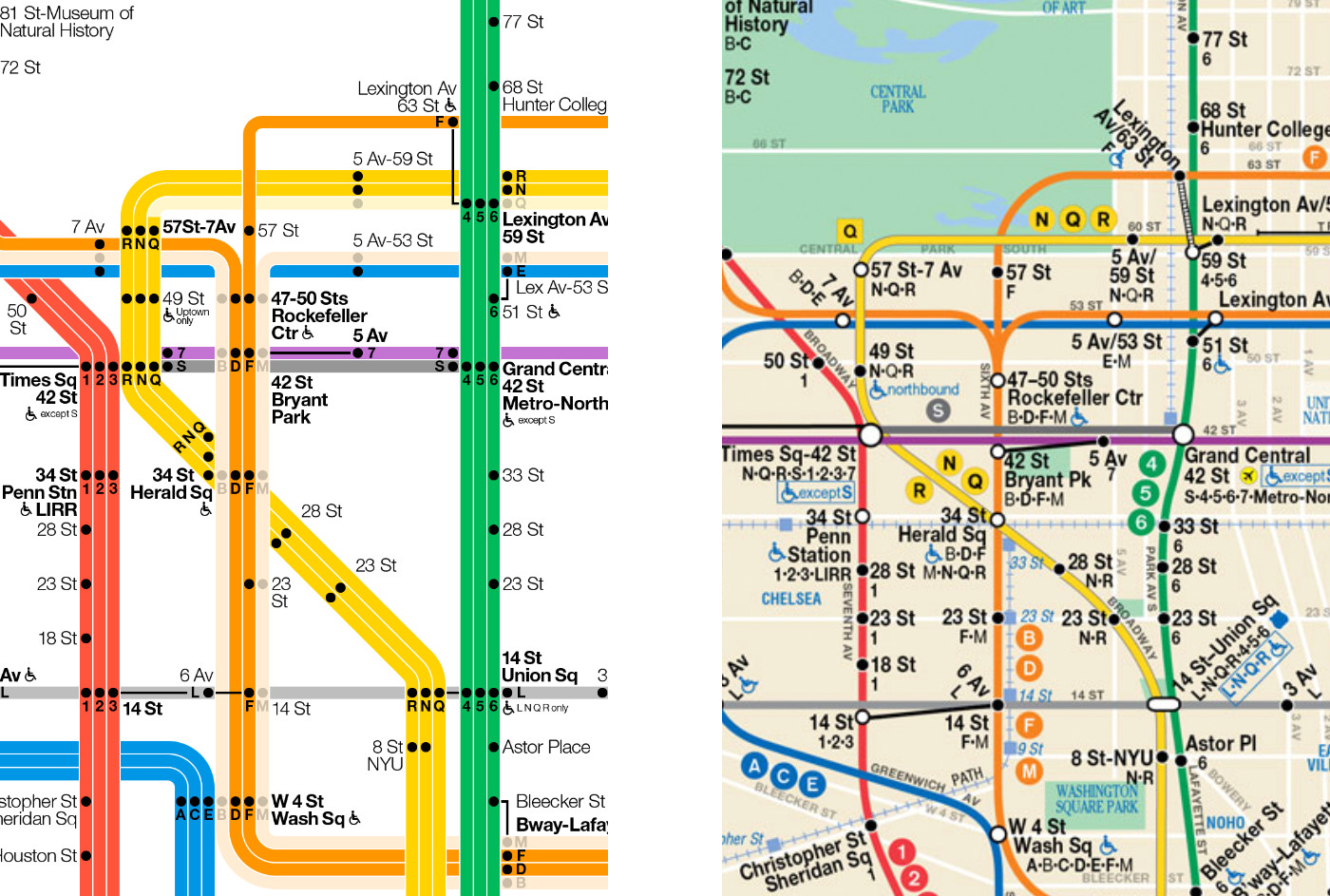 Lines running local, then express and then local again is a special feature of the New York City subway that no map does a good job showing properly. This can be especially confusing for tourists. The diagrammatic map designed by Vignelli, that is currently used in its updated incarnation in the Weekender app, does a better job than the official map in this regard by showing every train as a separate line. It is still hard to get an overall understanding of the express sections since every line is drawn with an equal weight. 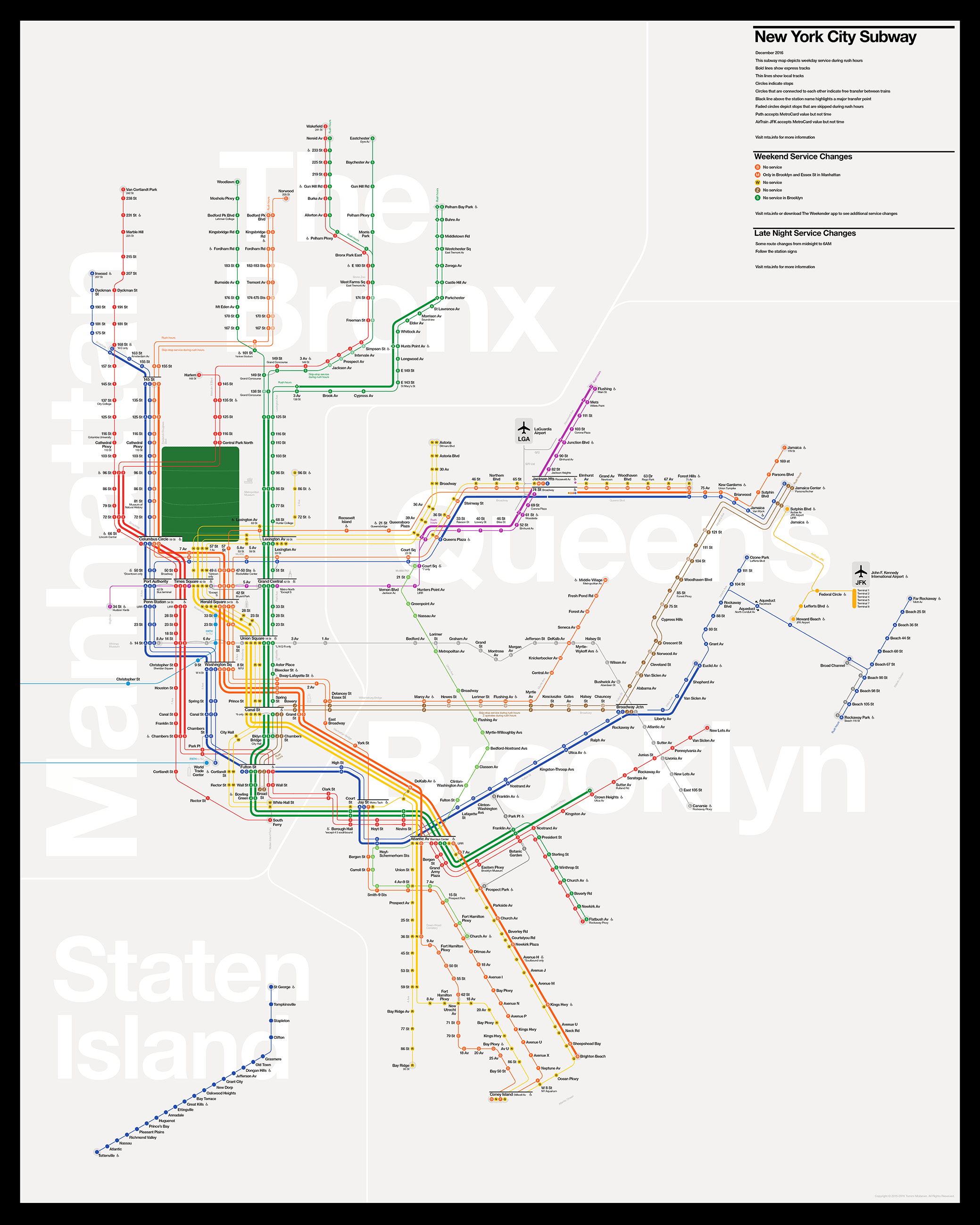 The goal was to create a subway map that is beautiful to look at, easy to use and custom designed for New York City.

One of these NYC specific challenges was to find an appropriate way to differentiate between express and local trains. After having lived almost a year in New York City before starting this map project I had never realized that D train runs basically all of Manhattan as express. It was impossible to see that from either of the official maps without actually following the lines specifically trying to decipher that piece of information. A quick glance at the map just wasn’t enough.

Another unique feature of New York City are the five boroughs (Manhattan, Brooklyn, Queens, The Bronx and Staten Island). They are almost like cities within a city and the navigation in the subway system is built around them. You don’t really need to know the exact geography of the area to be able to navigate in the city. You just need to know where the different boroughs are located. 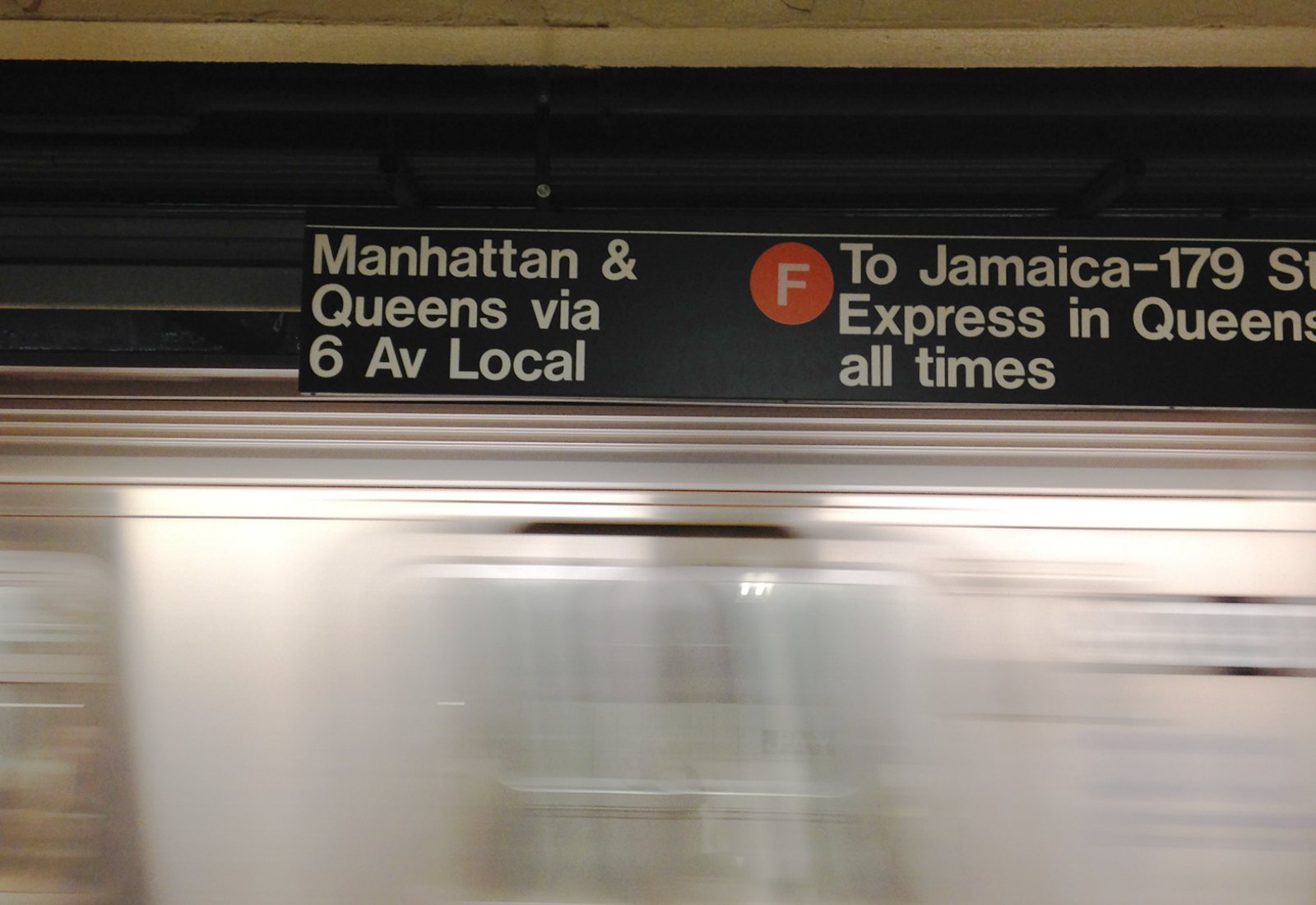 ”Brooklyn bound express train” or ”Queens bound local train” are something you can hear in the announcements and see used in the station signs. By clearly showing where the boroughs are and by differentiating between express and local trains the map nicely matches the rest of the navigation scheme. 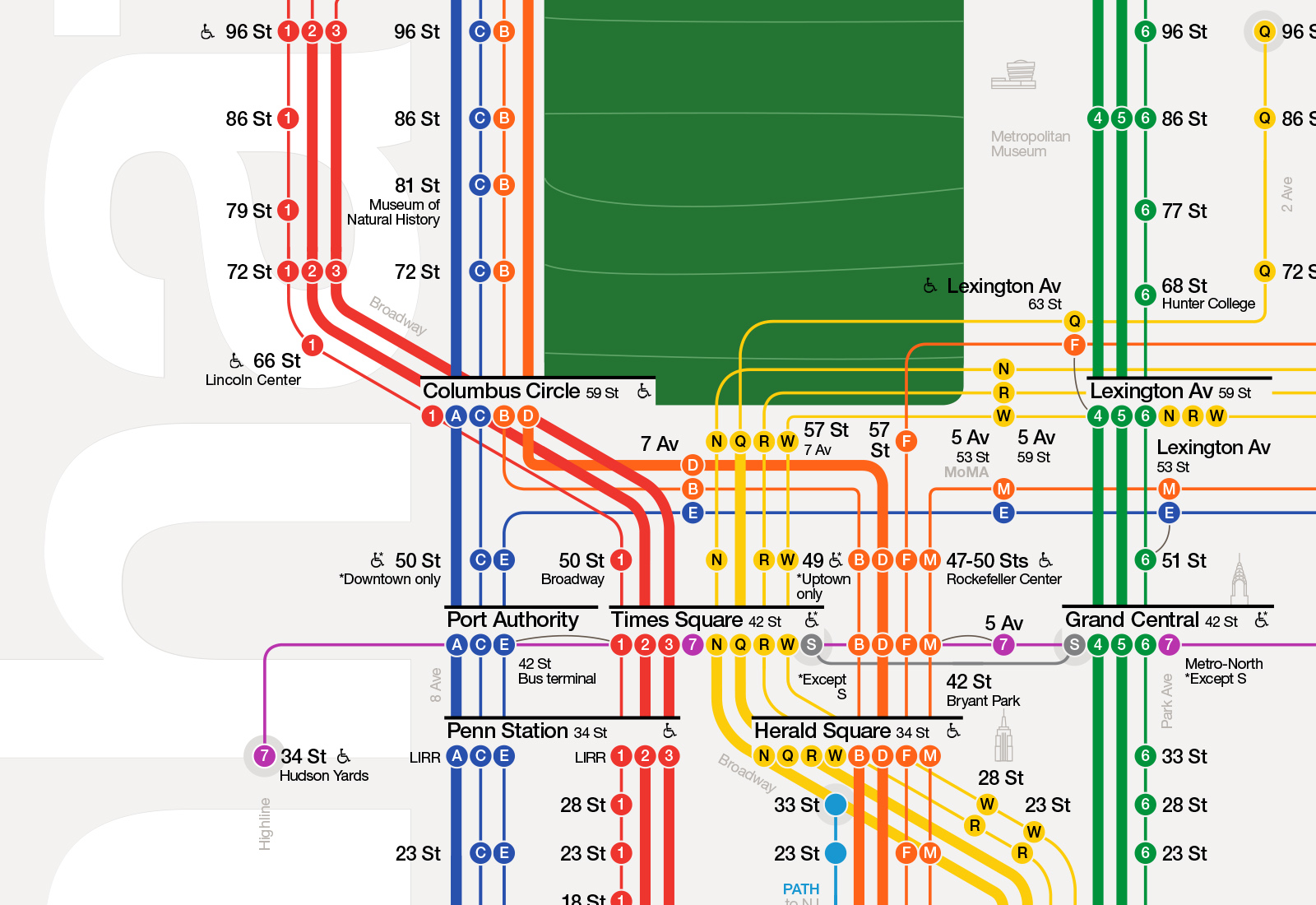 One of the only elements of geography that anyone visiting or living in New York City can be counted on to know with almost 100% certainty is Central Park and its location in the middle of Manhattan. Lots of big cities have famous parks but the perfectly rectangular shape, the prominent location and the overall lack of green space in the city makes Central Park pretty special. I wanted this to be reflected in the map. Moreover, most of the tourist attractions are below Central Park. It kind of functions as a You Are Here dot except that it always remains in the exact same spot on the map.

Instead of showing lots of geographical details the map highlight sights, major landmarks and museums. Those are useful navigational aides to many people. Streets are more specific to where you happen to be heading at any given time and most of them are useless most of the time but people can be counted on to know at least some of the major landmarks.

The numbered grid system used in New York City makes it easy to navigate the streets above ground especially in Manhattan and since the subway lines often follow the grid it makes sense to include the major streets that subway lines run along into the map. They are also used in the rest of the signage system on the platforms and in the trains, for example ”6 Av Local” or ”Broadway Local”. 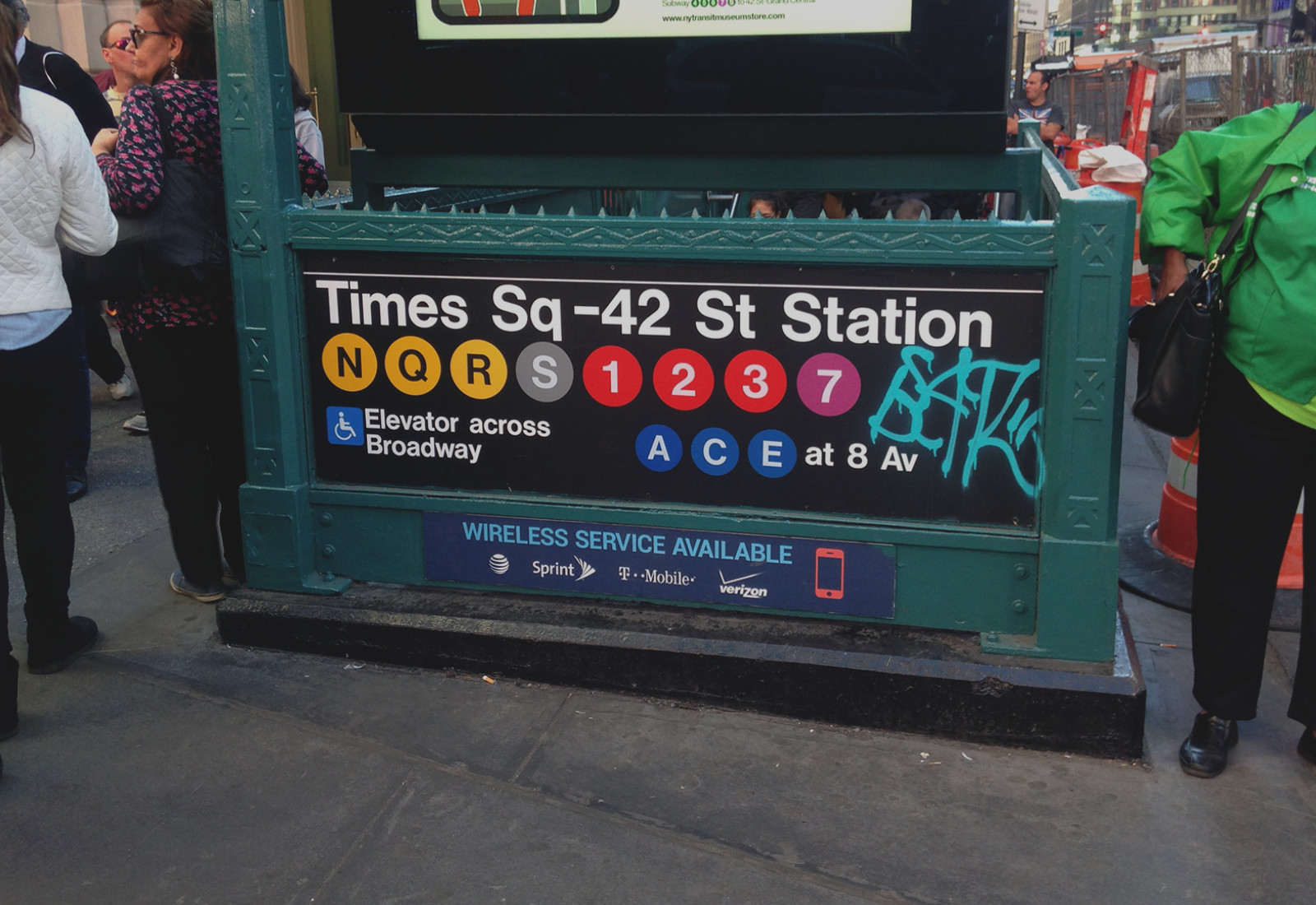 NYC Subway has an unusually large number of transfer points. Lots of major transfer stations also happen to coincide with attractions like Times Square or Grand Central so making these stations more prominent than the rest of the stations makes both navigating the system and locating yourself on the map easier. This way it is also possible to show all the trains stopping at a specific station in a row below the station name which is exactly the way you would see them at station entrances. I like this kind of connection between the map and the real world. 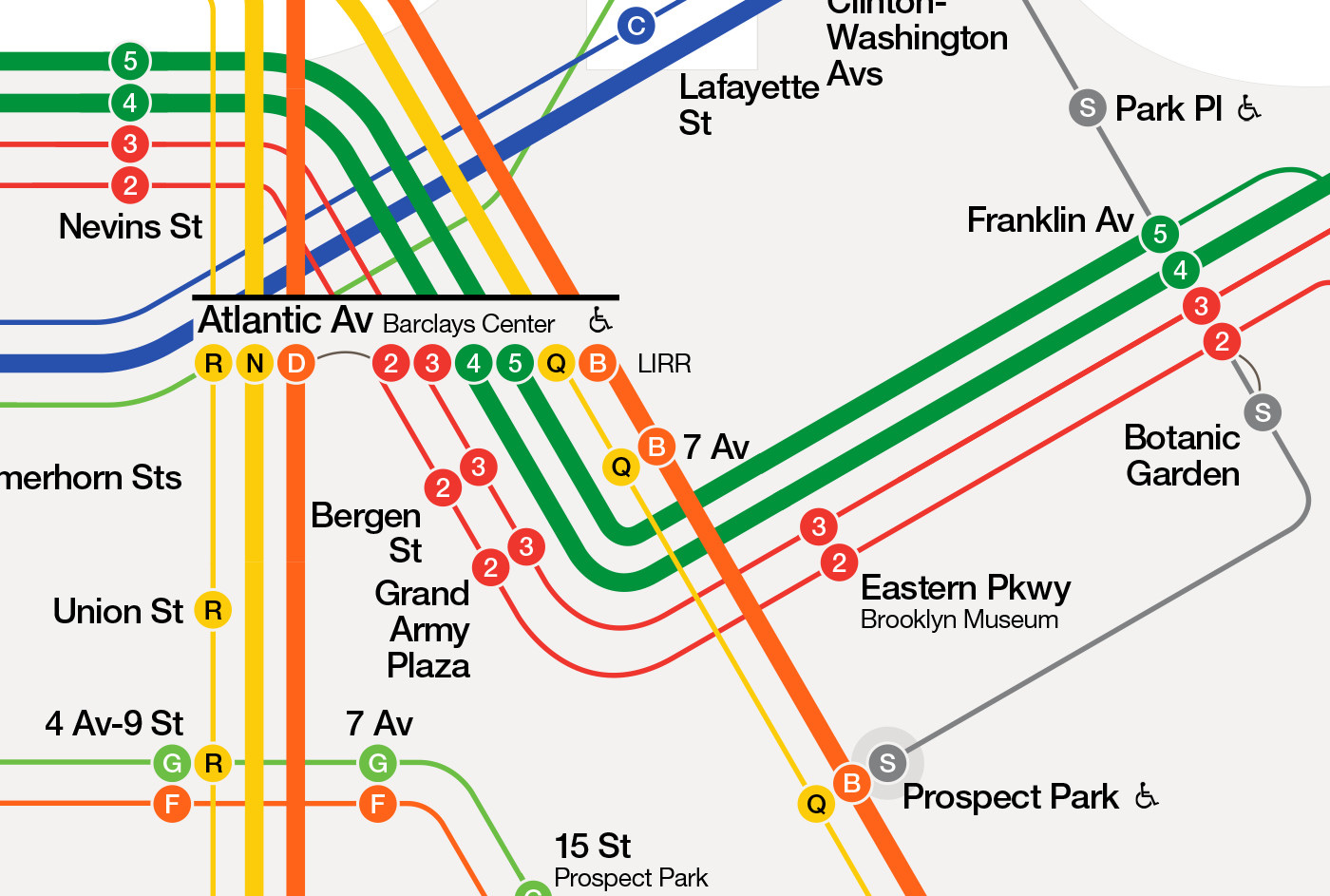 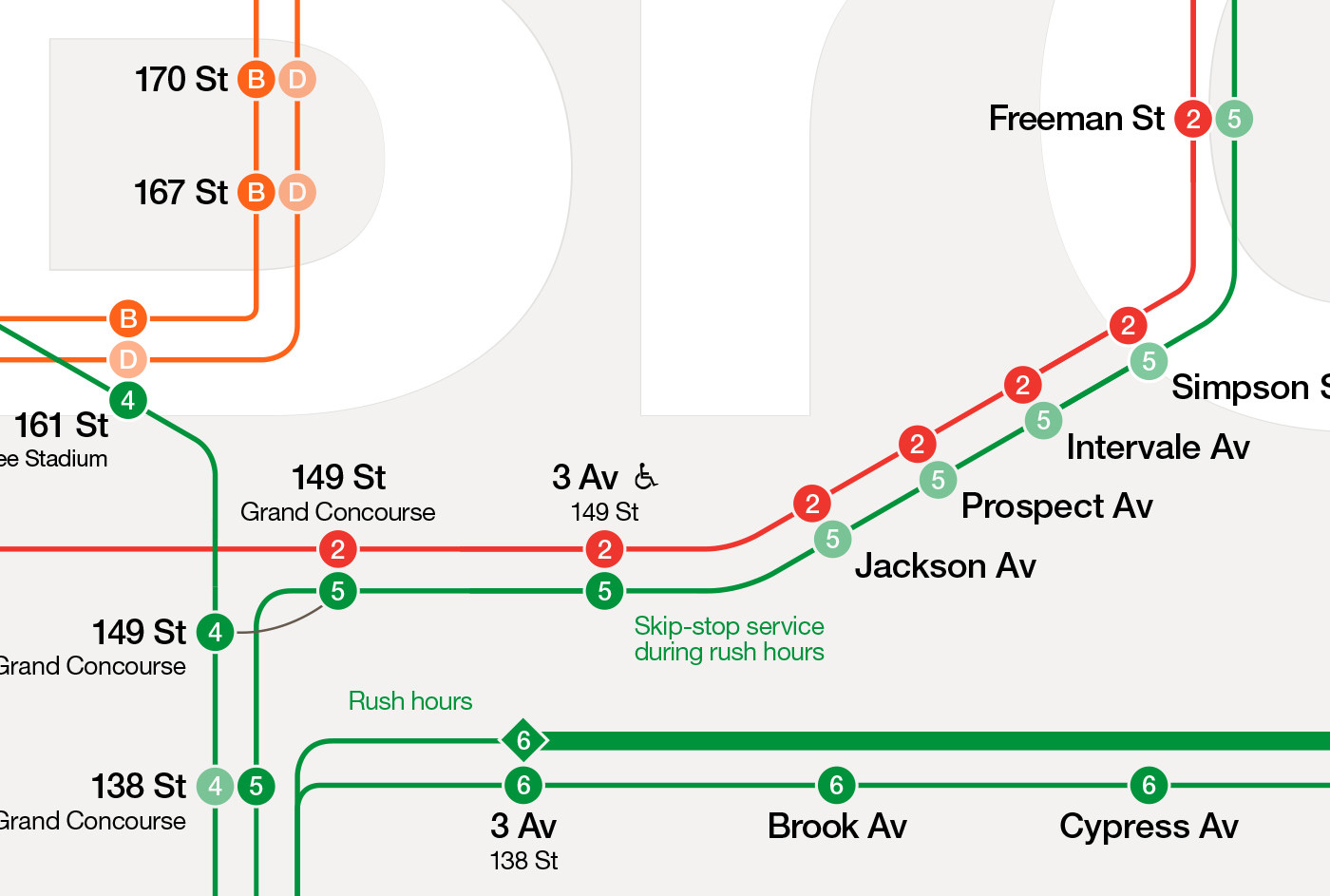 Additional improvements over the current maps are a clearer way to show rush hour extensions and skip-stop trains. Riders should now be able to understand these just by looking at the map. The map also shows PATH stops within Manhattan as equal to the rest of the subway stops since it really is a subway type rapid transit system connecting New Jersey to Manhattan. PATH also accepts Metro Card as does AirTrain JFK which is treated in a similar manner on the map.

As with any design, the way it looks is as important as the way it functions. The Vignelli map is still so popular because it simply looks good. The updated version is also pretty geographically accurate which many people may not realize since the geographic inaccuracy of the original map is so often referenced.

My design uses 30, 60 and 90 degree angles to show subway lines instead of the more common 45 and 90 angles also used by the Vignelli map. This allows for a better geographic accuracy while still looking more organized than the free form lines of the current map. Though free form is naturally even more geographically accurate. 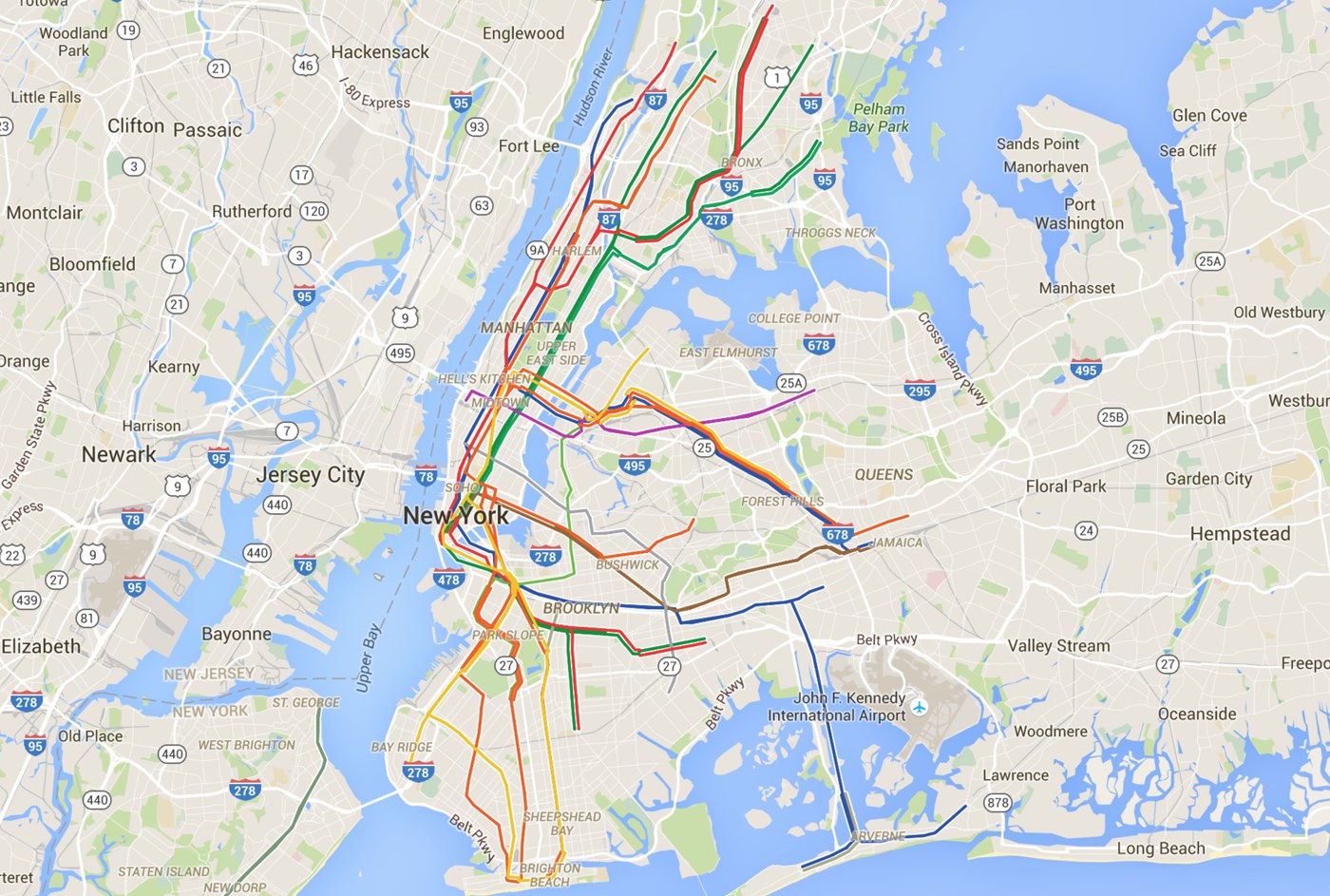 Screenshot of Google Maps with transit layer turned on

It is worth remembering that no NYC subway map will be completely geographically accurate since Manhattan has so many lines in such a small space compared to the rest of the city. Complete accuracy is not even needed in a subway map which is ultimately about finding a way from one station to another through the network.

Subway/metro maps should always look like they belong to the specific city they were designed for and to that specific city only. Design is always context specific and as shown above, New York City, like any other city for that matter, has its own specific features and character that should be reflected in the design.

Some of the characteristics of the new map summarized: